Written for the Weekly Writing Challenge 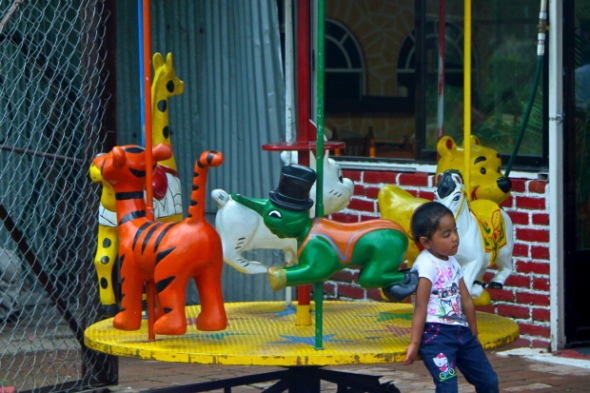 She liked to call it the Magic Wall.  The reflection in the window changed each time she spun around and always showed something vastly different from her reality but the thought of life beyond her prison made her smile.  She had always had a vivid imagination for a child.  Everyone told her that.  She loved to live in worlds in her mind, far removed from the day-to-day life in which she found herself immersed.  The chain link fences and concrete yards were a harsh world for an orphan.  She was convinced that only she could see the colors on the carousel and that one day the animals would come to life and take her out of this dark place.

Although her Hello Kitty jeans were new, she could feel the cement on her feet through the holes in her shoes as she pushed once again to spin around and see what the magic wall would reflect.  The windows of the house were beautiful and she could almost smell the scent of pine coming from the trees.  This was no ordinary house.  She knew this house was a home.  Inside of those walls lived laughter and love and warmth.  She wanted so much to find a home – something far removed from the brick building and cold walls where she spent countless days waiting to be found.  She knew that home had a mom who baked cookies.  She knew that home was where hugs were given freely and where tears were wiped away by something other than the back of her own hand.

The lifeless creatures held fast to their position as she spun once more.  As the carousel came to a stop she noticed that the image in the window had not changed.  Never before had she seen the same picture twice.   She turned the disk a quarter turn so she was no longer facing the wall that she now thought was broken.  She pondered what this signified. Was the magic gone?  Would the colors of the creatures cease to exist and her world become monochromatic?

She heard the high-heels clicking on the pavement before she saw anyone approaching.   Slowly she looked up to see the woman in the pretty blue shoes.  She was positive she had seen this lady before and seeing the brilliant color on those shoes made her realize that the palette of her world was not going to be shades of grey.  The woman was speaking to her and it took a moment for the words to filter through her ears to her brain.  She was no longer an orphan.  This woman with the brilliant royal blue shoes wanted to take her home and give her a family.

Happiness traveled through every part of her small child-like frame.  She spun around again and again, giggling as the blue shoes raced past her vision each time she circled by the woman who came to save her.  As the ride slowed and finally came to a stop she looked at the magic wall for the last time.  The reflection in the window showed nothing more than the chain link fence and corrugated sheet metal that had surrounded the only playground she had ever known.  The woman stood next to her and they grasped each others hand.  As they left the playground, the woman pulled out a picture of where they would live together.  It was the house from the magic wall.   She could see the warm light cascading from the windows in the photo and already felt like she was home.

She glanced over her shoulder as they rounded the corner and took one last look at the carousel.  The faded grey and white characters that had once been so vivid in her head now appeared as they truly were.  She was sure she saw one of them wave good-bye but she was too focused on the most beautiful blue shoes she had ever seen.

This site uses Akismet to reduce spam. Learn how your comment data is processed.