What wouldn’t she have done for his love,

for the forbidden taste of his lips,

for the soft caress of his fingers tracing lightly upon her skin.

She savored the memory of his smile,

she recalled his sweetness as he spoke his words of love,

words that were meant to only fall on her ears.

But his carefree words deafened the ears of the spoiled.

Those words were never meant for her.

His life had been promised to another.

And now her soul was trapped,

compelled to bear witness to his life with another.

Their black magic hardened on her skin like a crust,

holding her face in sadness for eternity.

Her body now a statue,

held fast in its place,

her eyes meant to watch him,

reminded every day of what she cannot have.

to a lifetime of anguish and melancholy.

In the darkness he would sneak out to visit her,

his touch was just as warm and his words of love, just as sweet.

Written for the Grammar Ghoul Challenge – combining the above painting, Saint Moritz, by Tamara de Lempicka with the word prompt:

A hardened layer, coating, or deposit on the surface of something soft 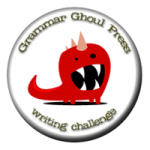