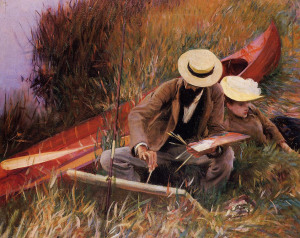 Her silence began to paw at him.   Like the constant yanking of coat-tails by an impatient child,  her wordlessness did more to annoy him than if she were nagging him, as she usually did on these trips.  But she was petulant in her nature this morning and it was agitating him to the point that he could not focus on his painting.

The day had lent everything he required for his creative process.  The sky was reflecting a profusion of purples and blues off the water and the grass was standing perfectly still, waiting for him to capture its very essence on his canvas.  She began to pick at the weeds in front of her and sighed heavily each time she threw a collection of dying blades into the windless day.

With each of her exhalations, his brush stroke became angrier and more forceful.  The once stunning colors on his palette were becoming a mottled collection of angry hues and the overwhelming emotion he felt rising in his cheeks began to match those shades of regret and dejection.  The beautiful day now felt sour and unfriendly.

He put his brush down and stood to stretch.  She turned her back to him and that simple gesture was the last act of child-like behavior he would tolerate.  In one fluid motion, he reached into the canoe and, without thinking twice, grabbed the paddle and struck the back of her head with all the force he could muster.  Her skull split like a ripe melon and an arc of blood spatter found the extra canvas hidden in the canoe.

After standing over her for several minutes, he delicately placed her hat back over the gash on her head.  He studied her for a moment.  There was such a serene quality to her silence now and he felt the inspiration to begin painting again.  He reached the for the canvas in the canoe.  There was something intriguing about the pattern of blood and his brush strokes on this new piece of art gingerly worked around those drops to maintain their artistic integrity.

He felt great satisfaction looking at his newest masterpiece.  He placed the canvas on the now spare seat in the canoe and began looking for some large rocks.  He would have to do his best to make sure she wasn’t found near the others.

Written for the Grammar Ghoul challenge:  using the word “paw” as a verb and using this picture to write a story up to 750 words.  I’m not sure why my creative brain always goes in the direction of the macabre. 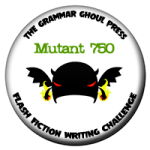