I used to love carving pumpkins.  I was one of those weirdos hoping to have the most creative pumpkin on the block, so I bought a carving kit and some patterns and locked myself in a room to avoid distraction.

Walls were spattered with stringy pieces of eviscerated pumpkin.  Elongated strings of profuse verbiage slithered under the doorway, assaulting the ears on the other side of the door, and small drops of minor arterial spray infused themselves into the paint on the wall.  But at the end of the painstaking process I achieved success!  The copious amount of band-aids, blood loss and light-headedness were worth the effort.  My pumpkins were the talk of the town.  My then-boyfriend’s children (who I still refer to as my step-children) were even proud to acknowledge the creativity on our front doorstep.

After my first attempt, I became a little less guarded when it came to the carving process and the whole family would get involved.  Where there were originally only two arms covered in pumpkin guts, eight sticky arms reveled in the joy of dissecting the large gourds and separating the seeds from the gooey mess.  Each of us skilfully created our masterpieces and sat back with a smile as the toothy pumpkins returned our stares.

The house would begin to smell of the roasting pumpkin seeds and, after a massive clean up, we would light our pumpkins and snack on the seeds in the darkened living room.  The memories of those nights of laughter and camaraderie are the ones I still hold close.

As the eve of Halloween approaches, I am slightly saddened that those years are so far behind me.  I live on a street where no children trick-or-treat so there is no need to create any more scary faces.  Perhaps this year I should take advantage of the fact that my digits are all still intact and drag out the carving tools once again.  I’m sure my dog would like to sit in the dark with me staring at faces like these: 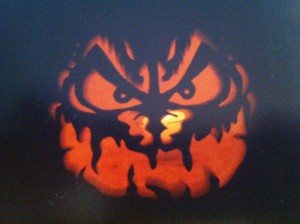 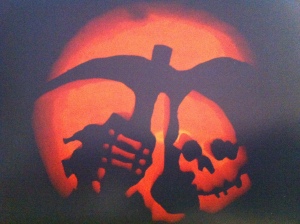