“Three things cannot be long hidden – the sun, the moon and the truth.” ~ Buddha

I have lied.  I have told untruths throughout my life.  Whether it has been to protect another or to surreptitiously protect myself, words born from the fictitious have previously escaped my lips.  But as a great student of life, I learned early in the game that lying only creates a web in which we will eventually become entangled.

Lies beget more lies.  Soon enough, the merry-go-round of deception increases its momentum and those who intentionally expound on their distorted reality are eventually hurtled into the real world at full speed.  And when their trickery finally meets the facts of sensibility, the results can be disastrous. 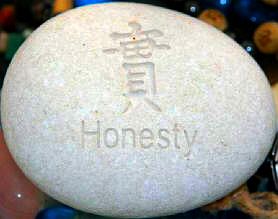 Small white lies aside, I like to think of myself as an honest person.  I leave the fiction in my life to my writing and deal with my life in the most honorable way I can.  Being honest simply means I am living my truth.  Being the most sincere version of me allows me to never have to think twice about the words that have escaped my lips.   And just being truthful with myself grants me the luxury of never having to second guess the reflections I share with anyone else because I don’t ever have to keep track of what I have said in the past.

Big or small, lies are lies.  And when you know a lie has been spoken aloud by another, it is enough to make you question the factual integrity of anything else they say.  Knowing you are being lied to is bad enough….but knowing you aren’t worth the truth is excruciating.