Christmas, for me, doesn’t feel as magical as it used to when my parents were still alive.  My dad was the biggest kid of all and he would happily stroll through malls that were bulging at the seams with shoppers trying to find that perfect gift. He would also be on the phone at 6:00 am on Christmas morning, pulling us from our slumber to make sure we were up and ready to come over to open presents.  The Beach Boys Christmas album would be blaring in the background, as it was each Christmas morning, and he would impatiently pace around the overflowing tree until we arrived.

My mother would embrace her inner elf and make their house look like Santa’s workshop had overflowed into every room and the smell of fresh-baked cookies and other goodies always filled the air.  The dining room table, that was once filled with tins of cookies she had made for many of the local businesses, would be set to perfection with all of the festive tablecloths, napkins and candles.

Perhaps some of my Christmas spirit was taken when they left.  Maybe it also has to do with the fact that I don’t have kids of my own and my nephews are now teenagers, so the urge to feel elvish is lower on the register.  But over the last couple of years, I have been finding much more of my Christmas spirit through the annual toy drive I have run every year for the last five years. 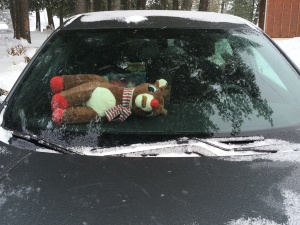 With a stuffed Rudolph safely tucked onto my dashboard so his red nose could lead the way, we drove two cars full of toys to the Food Bank today and were able to be there to help some of the families find the perfect gifts to give to their kids on Christmas morning.  To say I am now bursting with Christmas spirit is a gross understatement.  It was so heart-warming being able to stay and see the smiles as parents got to pick out the toys they knew their kids would love.

The spirit of giving is truly what the holiday is about.  And since I have just been injected with an overdose of that spirit, I think it’s time to go home, turn the tree lights on and crank some carols by the Beach Boys.  Merry Christmas to all, and to all a good night!

I knew this Christmas season would be difficult for me.  I’ve done my best to write my feelings into submission but they are stealthily lying just below the surface, waiting to bubble up when I least expect them.

Last night I celebrated Christmas with my brother and his family.  Nagging work schedules bumped the holiday up by a couple of days but any change in the old routine is a welcome change.  I arrived at the house with my food contributions, my secret Santa gift and the scrapbook I made of pictures of my mom so she could be with us in spirit.  What I wasn’t expecting was this:

My nephew had taken one of the candles I made for my mom’s memorial service in May, created a beautiful Christmas display and placed it in the middle of the room so she was with us during our celebration.  I now know how the Grinch felt when his heart grew three sizes.  I was so moved and my heart swelled so much that I thought it would burst out of my chest.  It was all I could do not to hug him until he turned blue.

That gift, that display made by a 14-year-old boy to honor the memory of his Nana, is, by far, the best gift of 2014.  I could not bring myself to show too much emotion for fear that the tears would come and never stop.  Instead, we high-fived and continued on with the merriment.  Gifts were opened, food was consumed and a great amount of laughter was shared.  I learned to never again go in a swimming pool with my brother (future blog post) and I learned that the spirit of Christmas was not tarnished by the absence of my mother, but lives on in the way we keep her spirit alive.

The tears finally came shortly after I got home.  They did not come slowly or poetically but exploded out of my body to make room for my swollen heart.  I can only hope that both of my nephews learned a few things about Christmas.  It isn’t about the material things wrapped in bags or boxes.  Christmas is about the people who are wrapped in your heart and doing everything you can to make sure they stay there.

Merry Christmas to all of you and may you enjoy the true spirit of the holidays.

I generally live every day, 365 days a year, with the Christmas spirit, and being a big believer in Karma, that tends to bode well for me.  I’m always positive and trying to infect others with that same energy.  I’ve been asked by several people why I”m always smiling or laughing.  I will usually quote Will Ferrell from the movie ‘Elf’ and simply say, “I like smiling, it’s my favorite”.

This morning my smile was weakened a little by the blatant display of Grinch-like behavior from two strangers who have obviously not been dusted with the shimmering particles of the Christmas spirit.   A local TV station has been running a contest for the last four weeks.  Each week, on Tuesdays and Thursdays, they put a jumbled word on the screen and viewers must unscramble the letters and send both words in for a chance to win the weekly prize of $10,000.00.

I woke up late Thursday morning, and mistakenly forgot to set the PVR, so I missed the scrambled letters.  Apparently I was not the only one as the mad flurry of Facebook posts echoed my lament.  There were a few comments about missing the Tuesday letters, so I thought I would harness the Christmas spirit and send the word from Tuesday and ask them for the Thursday letters in return.  I sent that word to both women this morning………and got no response from either of them.  Merry Christmas you selfish women.  I don’t think Karma will be picking either of your names from the hat on Monday!!

Thankfully, the news station replays its morning show online and I was able to find the segment of the show that I missed.  And to ensure that those two women’s names get lost in a bigger pile of entries, I put the link to that portion of the morning show on the Twitter feed so more people could enter.  I even went so far as to up the Karmic ante and tweeted that if my name is drawn, I want them to draw a second name so we can split the prize and share that Christmas gift. (which was my plan, regardless of my spirit being temporarily derailed by these two women)

Wouldn’t it be terribly ironic if I did win and the other name that was pulled was one of those two women to whom I gave those scrambled letters??  Their complete lack of decency should negate their entry into the contest.  Wish me luck, and while I put an extra pin in the voodoo dolls of those Christmas-spiritless women who really don’t deserve to have their names in the pot in the first place, let Lady Luck roll her magical dice!!

Okay, so that is  not how I’m ending this post – if one of their names is pulled from that Karmic hat, it just solidifies the fact that they were meant to win one way or another.  Regardless of the outcome, I know I did a good deed today and perhaps that feeling is worth the $5,000.00 that could have been.

What would you have done if you were in the same Karmic boat?