I have blogged several times about my Winnie The Pooh and the fact that we celebrate our birthday together every year. My mother made him from a 1960’s McCall’s pattern and gave him to me on my first birthday. He has seen me through every happy and every sad time in my life. It may sound strange that an almost fifty-year-old woman still has a stuffed teddy bear, but I can’t imagine my life without him.

Though Pooh has undoubtedly been scarred by some of the trials he has witnessed me going through, nothing could have been as devastating as his physical altercation with a Woozle, known to humans as a Black Labrador Retriever. I was not there to witness the carnage but I came home from work to the aftermath. The trail of foam that led upstairs to the discovery of Pooh’s ravaged face made me burst into tears. I was twenty-one years old and called my mother in hysterics because Pooh had been assaulted and he lay in pieces in front of me. 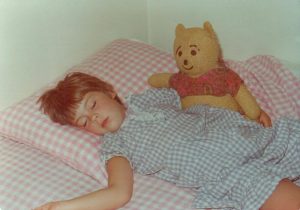 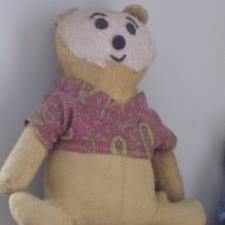 After some amateur plastic surgery, thanks to my Nana, Pooh had a new face and a new outlook on life. He had survived what was arguably his worst day and had come out on the other side. He now resides on a shelf above my bed. It’s not quite the one-hundred-acre wood he was accustomed to but he seems to have acclimated.

Last night, I watched the movie Christopher Robin starring Ewan McGregor. When Pooh asks how old he will be when Christopher Robin is one-hundred and Christopher Robin answers ninety-nine, the tears started. That is me and my Pooh. He came into my life on my first birthday and my mother knew my fondness for a silly old bear of very little brain would lead to a lasting relationship.

Pooh is my constant. Regardless of what life throws at me, he represents my past, he remains an ongoing part of my present and he will stand beside me going into my future. For being a bear of very little brain, his intelligence speaks volumes. He will forever have the wisdom to just sit back and listen.

“There are two types of people in the world.  Those who waste time staring at a closed door and those who find a window.” ~ Phil Dunphy, Modern Family

I love watching Modern Family and as soon as I heard this quote I immediately thought of my dad.  It wasn’t because he was the eternal optimist, although he was.  It was because he took this quote to a whole new level of reality about twenty-five years ago.

My dad sold real estate and he was regarded by many in his field to be one of the best.  The man could sell ice cubes to Polar Bears.  So when a family of five decided they wanted to purchase a cottage in Muskoka, my dad went out of his way to find the perfect place.  He had heard of a property that was being listed, but not yet officially on the market, and he knew it would be their Utopia.  The lake frontage was stunning, the view was incredible and the neighborhood had the promise of only increasing in value.

They ventured en masse to see the property and, because it had not been officially listed, they were unable to access the cottage itself….until my dad spotted the open window.   He would never be able to convince the family of the charm that cottage possessed unless they were able to see the entire property, inside and out.  The wheels in his head began to turn and his eyes finally fell on the youngest of the three children.  With sufficient cajoling and a little effort, the couples’ youngest son was boosted up and sent through the open bathroom window.  Moments later he appeared at the front door to, just as illegally, let the rest of the family enter what would eventually become their family cottage. 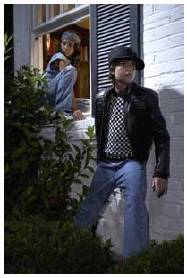 That closed door meant nothing to my dad.  It only took a few moments for him to realize that portal was not his only option.  If he had let himself be constrained by his perceived reality, that cottage would never have been bought by this family.  His perseverance and willingness to think outside of that boxed-in door led him to that open window, the sale of a beautiful cottage and the happiness of a family.

As it turns out, that relatively innocent “break and enter” would have much more of an impact on me, when years later their daughter and I would meet while working in the same pub and become best friends.

You are never stuck in a situation because the door seems to be closed.  And although you think that door may be the only way in or out, look for that open window.  It’s there somewhere.